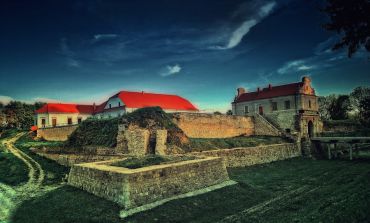 Zbarazhsky Castle truly is an architectural gem and Ternopil region Zbarazh hallmark of the city. Castle located on Castle Hill - in the park, not far from the city center. The castle was visited by such famous figures as the Hetman Ivan Mazepa and Tsar Peter I.

Construction led the last representatives of the Zbarazhsky - Yuri and Christopher in 1626-1631 years by the Flemish architect van Peena that inspired one of the fortification projects Vincenzo Scamozzi. Architectural style - the late Renaissance. The main purpose of the castle was the defense. Castle impresses with its greatness and power, though at first glance it looks simple enough.

The walls of the building witnessed the siege of Bohdan Khmelnytsky during the national liberation war. Betrayed by the Tatars, Ukrainian forces had to sign a disadvantageous contract Zborowski. These events are included in the book by Henryk Sienkiewicz "Fire and Sword", after the film adaptation of the castle became a tourist destination.

Zbarazhsky castle was granted the status of the State Historical-Architectural Reserve only in February 1994. It then began restoration work carried out since the castle was badly damaged during the First and Second World Wars. Then the structure of privately owned Emilia Yavetsa and in 1908 the government ordered him to carry out restoration work, but they did not take place. With the acquisition of Ukraine`s independence, there was a museum of the National Reserve "Castles of Ternopil."

What is the best accessible to the Zbarazh Castle from: