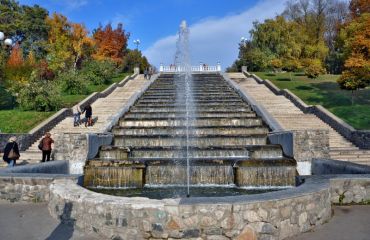 Cascading fountain flowing down the steep slope of the city park - one of the favorite places of Kharkiv. It was erected on the site of the pre-war ladder, which was destroyed. The opening was timed to the tercentenary of Kharkov in 1954. Fountain is a cascading ladder by which the water rushes down. From the upper observation deck visible Lopan River Valley.

After the collapse of the Soviet Union, the fountain was in disrepair - it was not functioning and gradually destroyed. However, in 2004, to the next anniversary of the city, it was restored.

Not far from the cascade fountain in the park to them. Shevchenko is a number of city attractions. For example, Mirror Stream , which is considered one of the symbols of the city, a monument to a soccer ball , and others. A little further on is the concert hall "Ukraine" and Kharkov National Academic Opera and Ballet Theatre. Lysenko .

What is the best accessible to the Cascade Fountain from: