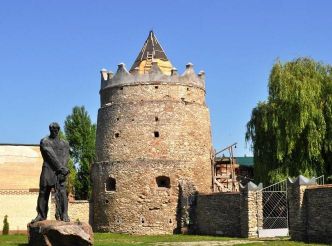 If you - a lover of antiquity, you will be interested to see the remains of the ramparts and the general watchtower that are well preserved since the Middle Ages. About an hour drive from Khmelnitsky - and your eyes gaze Letichevsky castle. The exact date of its construction is unknown, but the mention of the castle belong to 1210 - when the fortress fell as a result of the Tatar invasions. While she was wooden. A construction of stone structures in the 16th century took up Kamianiec elder Jan Potocki at the insistence of the Polish king.

In 1606, on the grounds of the castle begin to build a Dominican convent. A Pope Clement 7th gives monastery icon of the Virgin. Subsequently, it was recognized the miraculous. The icon of the Virgin Letychiv considered the patroness of Podolia. Image twice exported to Poland under the Bolsheviks, who used the temple is under the Commissioner, then the stables. Today rebuilt Sanctuary (sanctuary) Letychiv Virgin. Temples and monasteries take pilgrims.

Behind the walls of the castle fortress - the grave Ukrainian Robin Hood - Ustym Karmelyuka. Installed and a monument to this famous people`s avengers, sung in Dumas.

And with a shady linden alley in the castle bind legend: that landed her in a hurry, a little ahead of the movement of the carriage of Catherine the Great, Empress not to miss looking at the surroundings.

What is the best accessible to the Letychiv Castle (Dominican Monastery) from: