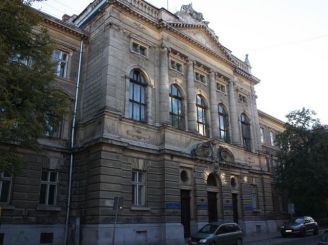 Lviv is filled with unusual old buildings . A walk through this city gives a lot of new experiences. One of the buildings that are must-see tourist Lviv - the Palace of Justice.

Palace of Justice - is the administrative building Galitsky court late 19th century. It is made in the Neo-Renaissance style designed by F. Skovrona. This three-story brick building, from which emanates the spirit of strength, power and confidence. The facade of the palace is decorated according to the main purpose of the building. On the creation of the balustrades and allegorical sculptures justice best masters of that time. There are so many sorts of decorative elements of meaning that their inspection will take a good portion of the time. But it is so interesting and exciting that lost sense of real time, and completely immerses you in the era of the "royal justice."

In the vestibule of the palace, there is another great attraction of this place. There remained the most unusual mirror Lviv 19th century, which is guarded by two lions alabaster.

What is the best accessible to the Palace of Justice from: