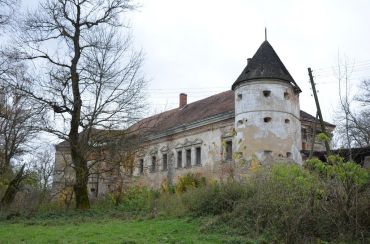 In the Lviv region, 27 km from the town is a stone Zolocev Pomoryansky 16th century castle. First, there was an Old Russian wooden fortress, and then at the Polish governor Jan Siena erected fortifications and buildings of stone.

Jakub Sobieski, who purchased the surrounding land, equipped the fortress powerful arsenal. There are cannon and gunpowder depots, barracks. The only way into the castle led from the north: through a wide moat on the drawbridge. On the other side of the fortress defended the river channel and floodplain Gold Lipa.

Polish King Jan III Sobieski, who inherited the castle, rebuilt much of it when it appeared the magnificent palace, a landscaped park.

In the 17th century it fell under the double-raids of the Turks and Tatars, she was burned, but recovered Jan Sobieski, and withstand subsequent strokes. In the 18th century a fire caused extensive damage to the fortress, and to restore it began in the 19th century.

In a palace complex Pomoryanskogo castle stands a monumental two-storey building of the royal palace in the Baroque style. Facade speaks of past greatness, but now transformed into a castle ruin, although it is still impressive. Fragments of strong defensive walls, corner towers.

What is the best accessible to the Pomoriany Castle from: