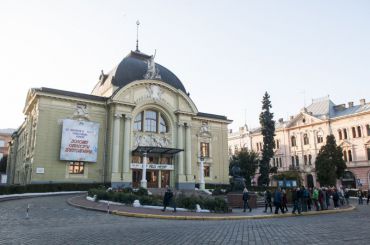 One of the favorite places of the residents and guests of Chernivtsi, of course, is the Theatre Square. The luxurious buildings, built in the last century, are striking in their grandeur and, at the same time, refinement.

Home jewel in this ensemble, of course, theater. Built in the early last century by two geniuses, erecting legendary theaters of Odessa and Vienna, he fascinates wealth decor of its facade. Over its entrance is placed the sculpture is a scene from an ancient Greek tragedy "Oedipus Rex." In front of the pedestal to set an elegant sculpture writer Olga Kobylyanska, in whose honor and named the theater.

A short distance away is the theater elegant building of the former Jewish People`s House , erected in the eclectic style. Premises of the Romanian People`s House , which was used during the Soviet era as the House officers, surprised that his right side is much longer than the left - as the creators intended. All grand buildings were erected in the 20th century. But in 2000, the square appeared Avenue of Stars , which immortalized the names of well-known figures of culture and art, began his career in Chernivtsi.

What is the best accessible to the Teatralna Square in Chernivtsi from: