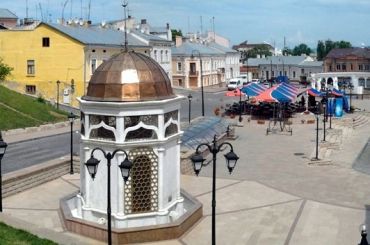 Chernivtsi is considered the pearl of Bucovina, a rich cultural heritage consists of a unique multi-style architecture. There are a huge number of ancient buildings, streets and squares.

Area Turkish Krynica - is evidence that the city was once a part of the Ottoman Empire. Well located on the square, is the oldest in the territory of Chernivtsi. During the reign of the Turks near the well was built a stone reservoir for drinking water, and the source was decorated with a crescent moon. In all likelihood, this fact was that the well was called Turkish. Over the years, well served residents of the city, its water used to extinguish fires, city baths, swimming pools for ritual Jews (Jewish mikveh), the Christian celebration of the rite of baptism.

Not so long ago, in 2008, the area was completely renovated, and has acquired a new, more original look. Above the old pit was constructed openwork gazebo in oriental style. Nearby is a circular arcade, which is located in the center of the fountain. Particularly noteworthy are the flower clock, which are the adornment of the area and forged iron bike set during the celebration of the blacksmiths.

Is an area in the old part of Chernivtsi, near the streets Sagaydachnogo and Turkey and is one of the favorite places of visitors and residents.

What is the best accessible to the Turetska Krynytsya Square from: