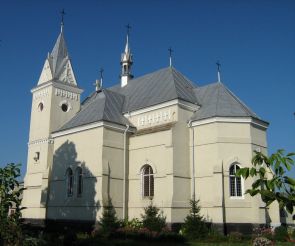 Church of St. Nicholas - is one of the most beautiful and significant buildings of the small town of Belz in Western Ukraine. Now it is the Orthodox community, and earlier it was the Greek-Catholic Church of the Blessed Virgin Mary. Hence the style of the building - modern with gothic elements: acute high towers that are typical of Catholic churches and reminiscent of an old castle. The former church is part of the historical and cultural reserve "Prince`s Bells" .

The building was built in 1926 by architect Calixtus Kryzhanovsky on the former site of the castle church of the 14th century. It can accommodate 800 people.

In the old castle church kept the greatest relic - Belz icon of the Blessed Virgin Mary, which is considered one of the oldest in the Mari iconography. According to legend, the image of the evangelist Luke wrote. Icon 656 years was kept in Constantinople, and then passed to the Byzantine princess Anna, whom he married Prince Vladimir of Kiev. After long wanderings icon was in Belz, where in 1382 it brought in Poland governor of the Polish King Vladislav Opole in Galicia. Now the image is stored in the Jasna Góra monastery and is known as the icon of Our Lady of Czestochowa.

By the 1000 anniversary of Belz Poles presented Ukrainian believers laser copy of the icon. It is kept in the chapel of St. Valentine, which is part of the temple complex. Also included Mari tower emblem Belz.

In Belz there are Greek-Catholic Church of St. Nicholas , it is located on the territory of the Dominican monastery of the 17th century.

What is the best accessible to the Church of St. Nicholas from: