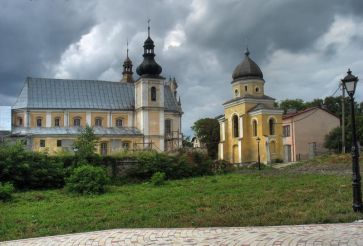 The small town of Belz in Lviv is one of the oldest in Eastern Europe. It was the capital of an independent principality, then the ACP province Rzeczpospolita. And the first mention of it is found in the "Tale of Bygone Years".

The town holds a rich history, because its origin dates back to 10-11 centuries. By decision of the government, in 2001 there was established historical and cultural reserve "Prince`s Bells."

Reserve includes four zones: the tract "clasp" - the former princely city; the city center with monuments of the 17th century; cemetery with wooden church of St. Paraskeva ages 16-18; Jewish cemetery of 17-20 centuries and the ruins of the defense of the shaft.

The oldest of the surviving monuments Belz - Hexagon Arian Tower in 1606. Historians discuss: perhaps it was a chapel, and perhaps - the city arsenal.

The reserve is worth seeing monastery complex Dominican sisters ages 17-18 with the church in the Baroque style, and the monastery complex of Dominican Fathers, dating from the same time. The earlier period on the territory of monastery ruins of the church, dating from the 16th century. But the cells of the monastery of Dominican beautifully restored, and now here is the town hall Belz. In the halls of the Town Hall is open historical museum reserve "Prince`s Bells", which holds archaeological finds.

One of the most beautiful and significant buildings of the town and the nature reserve - the Church of the Blessed Virgin Mary, now - the church of St. Nicholas .

What is the best accessible to the State Historical and Cultural Reserve "Princely Belz" from: