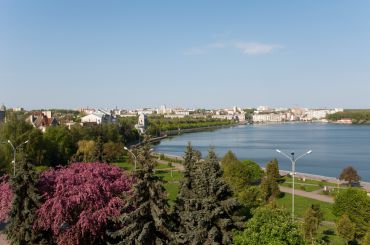 Hallmark of Ternopil is a huge man-made lake in the heart of the city. This picturesque place surrounded by a park from all sides.

Ternopil Pond was built in the 16th century in the marshes of the river Siret almost at the same time as the city itself. Its creator is Jan Tarnavskiy, Crown Hetman of Ternopil castle. The lake serves as a link to fortifications erected to protect against the Turkish-Tatar raids. Pond had known times of decline, and during the Second World War, was completely destroyed.

In the 50s of the 20th century began a large-scale restoration of the pond, which was named Komsomolsk lake. Its area was about 300 hectares. The name "Ternopil Pond" appeared in 1991, after the declaration of Independence of Ukraine.

In 60 years on the pond built "Lovers Island", which is now regarded as one of the most romantic places in Ukraine. You can reach the island only by boat, and in the winter when it is covered with thick ice, you can walk.

On the lake 2 ply passenger ship that rolled residents and tourists.

Ternopil Pond rich animal fauna. In late June, the yellow water lily blooms. Often you can find wild ducks and gulls river. It is home to carp, pike and catfish. Divers say that some catfish reach a length of 2 meters.

What is the best accessible to the Ternopil Pond from: