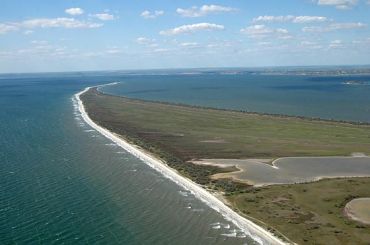 Kinburn Spit - one of the most favorite places of the inhabitants of the southern regions of Ukraine. Stunning nature and rich history of the place invites here to spend their weekends.

Kinburn Spit retained its pristine nature. Local places hold many secrets of ancient civilizations that inhabited the peninsula. The uniqueness of the spit that on the one hand it is washed by fresh waters of the Dnieper, the other - the salty waters of the Black Sea. Kinburn Spit called "pharmacy in the open air." On the spacious meadows grows a huge amount of herbs. One of the local natural wonders deemed Volyzhin forest .

More on Kinburn home to rare for the inhabitants of Ukraine. Pink pelicans long chosen peninsula. They gracefully floating in the air above the oblique. It is best to come here in late spring. In May, near the village of Pokrovka blooms whole field of wild orchids.

Spit there are several salt lakes with mud. Also on the shores of the lakes can be found therapeutic white clay. Curative effect lakes of Kinburn is not inferior to the Dead Sea. Here iodized salt is mined. Some crystals grow up to 12 pounds.

Kinburn Spit has always been strategically important object. Through it passed the main trade routes of the Old World. Many legends about this region. One of them tells the story of the Amazons who lived here under the laws of matriarchy and sacrificed men, until they were defeated Hercules. Another tells of the hidden treasures of the Scythians on the peninsula. Maybe you`re lucky enough to find the lost gold of savage tribes.

Get to spit better bus from Nikolaev . If you are traveling by car, it is better to leave the parking lot in the village of Heroic. The road is very bad. On the peninsula there are several lodges where you can stop and rest comfortably. Be sure to bring mosquito repellent.

What is the best accessible to the Kinburn Spit from: