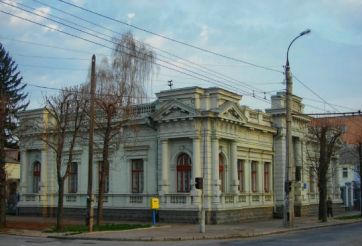 Unfortunately, historically, that remained in Cherkassy not too many historic buildings. Some were destroyed by war and other policies of the Soviet Union. Therefore, those monuments that are left, are of great interest for residents and visitors. The list includes well-preserved monuments Mayborody house.

History of the building Mayborody

At the turn of the 19th and 20th centuries in Cherkassy built railway. Contractor in the affairs of a local excavation excavator Mayboroda acted that due to this significantly enriched in its assets was also a brickyard and sawmill in Cherkassy. With no small plot of land in the city center, it starts to build a house for himself and family. The construction of the researchers defined as 1905-1910 years, but others call the end of the 19th century. The exact date of construction is unknown.

Design House Majboroda services recommended local architect George Filofero. He erected a mansion in neo-classical forms with elements of Renaissance and Empire. House of brick, was built on a stone foundation. Cap chipped tiled with granite. The house has been 3 large and 7 smaller rooms.

Fate owner has developed a rather tragic. After the events of 1917, he and his family emigrated to France, but later decided to return. 1921 gunmen made ​​their way into his house and killed during a robbery of the owner and his wife. After that, the Soviet government buildings positioned local branch of "universal education", then - kindergarten. But he did not become the owner of the building for a long time - give it to the needs of sanitation, which is there to this day.

What`s inside and out

The house today is a private residence, the planning of which survived from the time of its construction - 3 large rooms and 7 smaller. With interiors preserved old doors, window frames and authentic flooring. Around the house there are farm buildings, which are also summarized Maiboroda at the same time - the house for servants and stables for horses. They also complete composition of city mansion.

How to get to the house in Yalta Mayborody

The house is in the center of Cherkasy Shevchenko Boulevard near the area of ​​Bohdan Khmelnytsky. Because now it sanepidemstantsiya, the entrance is closed to visitors. By Cherkassy can get buses from Kyiv, Poltava, Kirovohrad and rail from Kyiv, Lviv and Odessa.

What is the best accessible to the House Mayborody from: