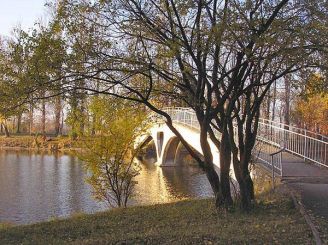 In these places, in the middle of the 17th century the village was swamped. The city also Stanislaviv (now Ivano-Frankivsk ) was laid here in 1662 Galician elder Andrzej Potocki. A land where there was a village, and has not lost its former purpose - there has long been hunted and rested a noble Polish gentry. Here the mayor A. Potocki founded menagerie.

It is in this area during the time of Stalin were dug ponds, Gateway to the river Bistrica-Solotvynska. In 1955, the floodgates opened intentionally, gushing water that has captivated all of these artificial ponds - that turned out so-called Stanislavsky Sea, which has become a favorite area for the citizens and guests of the city. It is a very picturesque place. Works boat station - you can take a boat rental. Well here in the summer. But there is a special charm in this area and in the spring and fall.

A Bridge of Love - the most romantic and symbolic territory in Lake City, as they call it an artificial sea. Traditionally come here to declare his love, photographed.

What is the best accessible to the Miske Lake from: