Church of the Holy Cross, Nadvornaya 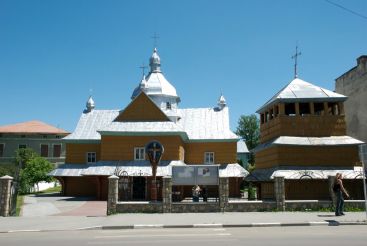 In the town of Nadvirna   on the street of Princess Olga is a wooden church with an interesting story. Initially, the temple was located in the village Manyava and was part of the monastery. In 1793 the monastery was closed and the church of the Annunciation was transferred to the city. For a long time wooden church bore the name until it was renamed the Church of Exaltation of the Cross.

Twice more the church underwent changes. In 1840 it was rebuilt a little. And during the First World War, the temple was burned. Soon the church was restored, giving it the original look.

The wooden church with a pitched roof covered with metal and a large dome,   It is an example of Hutsul folk architecture.

Church of Exaltation of the Cross belongs to the Ukrainian Greek Catholic Church and is open to parishioners.

What is the best accessible to the Church of the Holy Cross from: