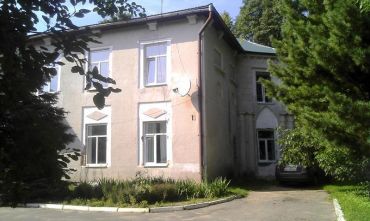 The once majestic castle Skarbek, and today the police station, located in the village Rozhnyatov Ivano-Frankivsk region. Find a point of interest. It is enough to go from the bus to the village and turn right at the first corner.

The story goes that the first castle appeared on the site in the 15th century, but still three centuries before that it housed a fortified village. The first fort was equipped with two towers and encircled by a wide moat. In 1735 the castle and surrounding lands became part of the dowry M. Benoy, who was married to Earl R. Skarbek.

The new owner took to rebuild the castle, trying to give it a Gothic features. As a result, there was a grand residence of magnates in the Gothic Revival style.

What to see in the castle Skarbek

Time passed, and turned in the lock placed court and police department. With the advent of Soviet power the former fortress was rebuilt, having lost its original appearance.

Today, the medieval past of the building resembles a hexagon only corner tower and wall thickness in meters. The two-storey building located police station.

In the village there is a unique wooden church. Natural attractions have become stages on the river Chechva.

How to get to the castle in the Skarbek Rozhnyatove

What is the best accessible to the Castle Skarbek from: