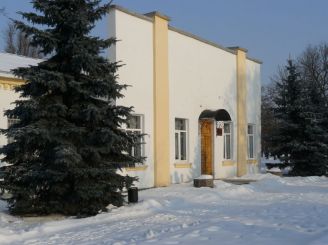 Kovel Historical Museum is located in an old building the pharmacy, which is known for its family visited Kosachev. Here to buy medicines and Larysa Kosach, better known as Lesya Ukrainka.

History Museum was established in 1989. First it was the Department of Volyn regional museum , and later became a municipal museum Kovel. It holds about 6,000 exhibits. Visitors can see a traditional Ukrainian clothes of 19-20 centuries, household items, learn about the history of Kovel region from ancient times to the present day.

The museum has a piano late 19th century, old books, weapons of 1812, the First and Second World Wars.

The museum presents a collection of old photos and the famous photo studios, which were in the city, is the pride of its funds. It is interesting to look at the collection and samovars.

Noteworthy and things made ​​in concentration camps as political prisoners convicted of connection with the OUN UPA.

A great achievement of the museum was the "discovery" of the forgotten name - an outstanding artist A. Lazarchuk. Now there Kovel Art Museum A. Lazarchuk.

What is the best accessible to the Kovel Historical Museum from: