Museum of Bells in Lutsk 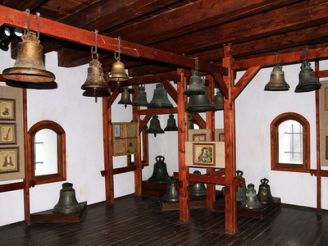 In Volyn is the only museum in Ukraine bells. It was opened in 1985 in the Castle of Westminster, or Lutsk castle . The exposition is located in one of its towers called Vladychya preserved in its original form since the 14th century.

The museum has more than 90 Bells 17-20 centuries: those people who collected the alarm or warning of danger; and others, were used for religious rites.

There is a bell and a length of only a few centimeters, which was intended for the mail coach, and the majestic church bell weighing nearly half a ton. There are bells serving firefighter, railroad, on the river pier, and a small school bell.

The oldest bell, which boasts a museum celebrated its 367 years. He is dated 1647 year, that is, still remembers the times of Bohdan Khmelnytsky. There are other unique items. For example, a square shape bells. In the Arkhangelsk region of Russia they were hung around his neck vazhenok - adult female deer that were central to the herd. The museum displays and royal bells that were attached to the horse`s neck from the state triples to warn of the approach of an important person. Heard there were a few kilometers away.

In the 60s of the last century in the castle bells were brought from closed churches. Previously, there were more exhibits, but 25 bells returned to churches, others simply age. But the search for exhibits for the museum continues.

On the territory of Lutsk castle are also Art Museum , Museum of books , the exposition of old building materials.

What is the best accessible to the Museum of Bells in Lutsk from: