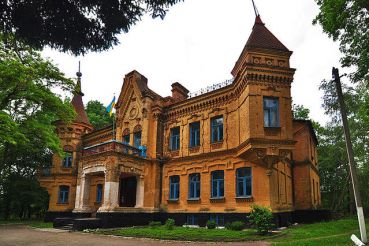 This palace is located in the village of Turchinovka that in Zhytomyr. It also referred to the possessions of the genus Tereshchenko, as Natalia, daughter of Theodore Tereshchenko, was married to Count Sergei Uvarov. But, in fact, the house was never hold Tereshchenko. The count had relatives among families University and Rayevskys.

The house was built in 1899.   On its facade to maintain the family coat of arms family Uvarov with the letter "Y" in the center.   The entire building is made of red brick. The house is rectangular in shape and is located on two floors. Palace played the role of a summer residence, so there was a park in which our day and kept a lot of trees. At the palace was created lake whose bottom Shots planks of oak. It is very expensive even now.   Inside the building there are still traces of gilt moldings and parquet centennial.   In Soviet times there was located PTU.

It is said that Natalia, after it became a noblewoman, not really enjoyed this privilege. She opened a maternity hospital and started working there the usual midwife. In his declining years she studied iconography and died at the age of 97 in France.

What is the best accessible to the Palace Uvarova from: