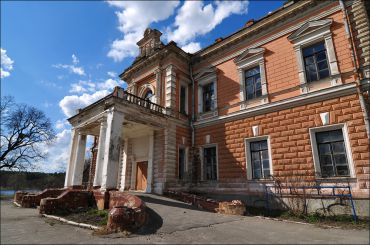 30 km from the city   Sumy in the village Kiyanitsa is an old mansion, known as the Palace Leszczynski. It was built in 1890.

Maecenas, sugar-IV Kharitonenko bought land here, where he built his first sugar factory and a small palace, which bequeathed to his niece, the merchant`s wife M. Leshchinskaya.

Until now dilapidated manor retains traces of its former charm.   A two-storey palace built in neo-Renaissance style, stands on the bank of a pond.   Manor is decorated with exquisite tower above the main entrance and is decorated with columns. The building is surrounded by a huge English park, planted with various trees and shrubs.

Preserved outbuildings, a small outbuilding and a bridge across the pond, built owners. Until recently, inside the palace could admire the remains of stucco and huge with elegant balustrade staircase leading to the second floor.

Now, despite the deplorable state, the palace continues to draw tourists. There are guided tours.

What is the best accessible to the Palace Leszczynski from: