Palace of the Lions, Bochechki 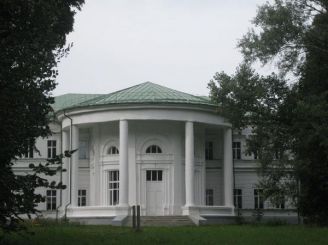 Konotop - very famous city. It was a lot of historical events. In his works Konotop recalls Gregory flower-Osnovyanenko and Kazimir Malevich remembers his childhood years spent in the city. Moreover, Konotop is also a major industrial city.

But it`s worth a little drive off the north-east of the city and we get to the village, which has a sweet name - Bochechky.

Legends about the origin of the village Bochechky

The first mention of the village dates from the year 1659. He lived mostly migrants from the Right-Bank Ukraine who fled here from the masters.

There are two main versions explaining the origin of the name of settlement. According to the first settlers first worked with wood, were Cooper (Cooper Village is near).

The second version - people first settled in groups, only the sides, from the village and called Bochechkamy.

For ages 18-19 Bochechky belonged to Prince Lvov, the roots of which reached up to the kind of Rurik. They had not only one Bochechkamy but many lands Slobozhanshchyna.

In 1745 it was decided to split the village park. And 40 years later built a magnificent palace here, the plan is brought from abroad Lviv daughter - Anna.

The palace was built by local serfs, and ordered the masters of Putivl. And in 1866 it was already completed. In the house was always warm. Rooms well prohrivaly summer sun, and in winter - the oven. But it was located beneath the building, hot air heated wall. Therefore, even the worst winter hostess was not terrible.

The luxurious two-storey palace in the classical style still remember the loud balls, circling around the room as ladies in expensive dresses and men in the most fashionable outfits.

After the revolution in the Palace were equipped College, there was until 1934. Subsequently, students are housed, engaged in educational activities and liquidation nepysemnosti. But in 1935, the mansion was rebuilt in order to equip it to school.

During World Palace was the place of deployment Nazi troops. It held prisoners. Retreating, the Nazis set fire to the building, but only burned roof.

What to see in Lviv Palace

Unfortunately, the former palace Bliss virtually nothing left. Now the room is in rural areas. For park no one cares, so it rather resembles a forest.

The main thing - is to get to Konotop. With this no problem. The city is a major transportation hub and rail. Then you drive to the bus station and take the bus towards Bochechok.

If you are traveling by car, then you have to go west on the highway from Konotopa R 60.

What is the best accessible to the Palace of the Lions from: