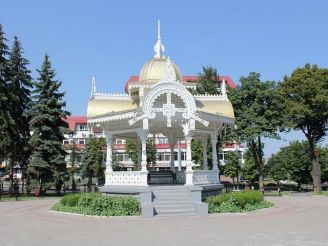 Each city has its own character - an unusual building, made in the original and unique style. Such characters with the city of Sumy   a gazebo.

Pavilions is the principle of the uniqueness of its construction without a single nail. It is all made ​​of wood. The second feature of the structure is that in all the years of the war, it will not suffer. Its construction began in the late 19th century, due to the fact that geologists from Saint Petersburg looking for oil in Sumy, but not finding it left the well. After that, an enterprising tradesman I. Leszczynski bought this piece of land. Deciding to take advantage of the well in the future or pass it on to descendants, he closed the hole of the metal plate and put it on the spot elegant gazebo made ​​of carved wood.

Gazebo made in the form of an open terrace with eight facets on a brick foundation. Pergola roof crowned faceted dome. Building rises 10 meters and its diameter is slightly less than 6 meters. Complement the beauty of decoration carved spiers, lace curtain and a variety of decorative patterns. Gazebo is surrounded by a bed of flowers and lilac.

What is the best accessible to the Sumy gazebo from: