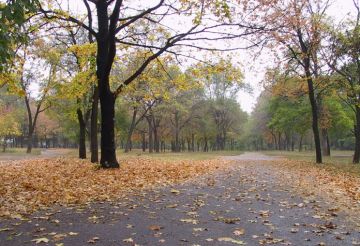 Park Complex October Square - the most important area on the map of the city . It began with her history of modern Dnipropetrovsk. This is the highest geographical point, being in which the ruling favorite of the Empress Catherine the Great, Grigory Potemkin, has issued a decree on the construction of the city with boundaries, covering all the land around. Later on this place was founded Transfiguration Cathedral.

Located in the heart of Park Complex October Square, Transfiguration Cathedral is one of the oldest temples in the city`s history. The first stone was laid in it by the Empress Catherine II in 1787, during her voyage Tauride. The appearance of the temple also purchased the queen herself and is strictly controlled by Potemkin, and the chief architect of the city - Claude Garoua. An important requirement was to create a likeness of the Roman Cathedral of Sao Paulo, which is the biggest in the world. Some similarities really respected, but the main building has suffered greatly due to the outbreak of the Crimean War and the death of Catherine.

The history of the park complex

October he was named in 1919 in honor of the eponymous square, uniting all park attractions. Up to this point it was called Sobor - on behalf of the church. Park has experienced a complete evolution from a faceless steppe to the most important historical monument. There was everything: Fair 18-19 centuries, revolutionary marches, burial eminent personalities of the city and the Bolsheviks, the battle for the Dnieper, student of the 20th century and Saturdays wedding photo shoot 21st. It is divided into several zones, consisting of a commemorative memorials, temple, park area and park alleys that unite them into a single ensemble.

The complex is surrounded by dozens of points of interest: Historical Museum Yavornytsky , diorama "Battle for the Dnepr" , the memorial cemetery, a monument to Mikhail Lomonosov (in its place until 1971 stood a statue of Catherine the Great, who took with him the Germans during the war), a monument to Alexander Matrosov and many other memorials and monuments.

What is the best accessible to the Park Complex October Square from: