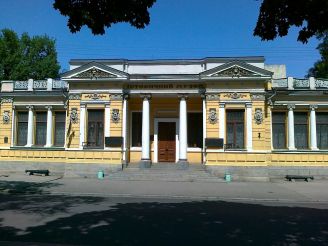 The Dnipropetrovsk National History Museum named after Dmytro Yavornytsky was founded in 1849. Originally, it was known as the Antiquity Museum of Katerynoslav Province. At that time, the museum kept not more than 100 showpieces. Prominent politicians and cultural figures – Alexander Pol’, Andrey Fabr and Dmytro Yavornytsky – did much to enrich collections of the museum. Over the years, the museum became known as one of the best in Russia.

Today, the museum is located on Karla Marksa Avenue. This building was built in 1905. It was a real architectural attraction of Katerynoslav, and even now it is one of the main sights of Dnipropetrovsk. Money for its building were collected by all the citizens of the town, large amounts of money were donated by local nobility.

Some artefacts were lost between 1917 and 1920. Many priceless items were used to stock other newly created museums. Despite the fact that lots of them had been reclaimed from local merchants and nobles, several had been damaged or degraded in quality. However, the number of rarities collected in the museum had been increasing. In 1928, one could count over 40.000 exhibit items.

WWII brought hard times to the History Museum. During the fascist invasion of Dnipropetrovsk, many of the exhibits were carried out to Germany, and some unique archaeological finds were simply destroyed. Since then, the museum’s collections are annually replenished by 3000 units in average. One can see hard and selfless work of several generations of the museum staff, who did their best to fill the collections with the rarest exhibits.

Nowadays, more than 250 different showpieces are presented in the History Museum, which belongs to not only Ukrainian but to the world history. Among them, one can find archeological monuments, collections of ancient goods of Egypt, antiquities of the Zaporozhian Cossacks, old books published in 16th-17th centuries, marble, furniture, clocks, weapon, paintings, icons, ceramics, clothing, stone masterpieces, and monuments of eastern cultures and much more. Lots of different exhibitions, conferences and lectures are held in the museum.

In 1968-1877, large-scale reconstruction work was held in the old museum building. A new building was added to the museum, where the Diorama “Battle for the Dnipro River” was installed.The History Museum is considered to be an architectural heritage site. Its total area is more than three thousand square meters. A special atmosphere fulfills the museum. Its visitors can learn the history and feel strong connection between generations.

What is the best accessible to the The Dnipropetrovsk National History Museum named after Dmytro Yavornytsky from:

26.05.2016
"Dear Donbass", in the river opened the first outdoor exhibit devoted to ATO
The exhibition will be part of the new Department of Municipal National History Museum "Museum of Dnipropetrovsk civil heroism in the ATO." The museum is scheduled in October 2016.