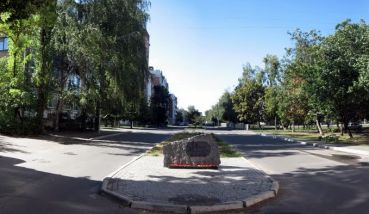 The only avenue of Journalists in Ukraine in Poltava opened in honor media workers. In spite of the alley, was also set in stone the memory of all journalists who have died, but their creative legacy still lives. Every year, journalists, students and everyone just hold of care alley.

On City Day, September 23, 2008 in Poltava, was opened avenue of Journalists, created on the initiative of the regional organization of the National Union of Journalists. By opening was timed consecration of the memorial stone, which was held by Metropolitan Philip of Poltava Mirgorod.

Earlier, during the war, this place was built a railway. Then, for many years of work, track failed and Poltava journalists suggested here lay the alley. Therefore alley and got its present name.

The newly walkway extends from school number 38 to the street Shevchenko. It is situated on the street Vatutina, and the ceiling is set at its intersection with the street Zygina. Today it is growing more than fifty trees were planted many saplings of mountain ash and lime.

In the process of planting trees was attended by journalists, students, and the mayor, the head of the regional council and volunteers. During the opening minute of silence to honor the memory of all present journalists Poltava, who throughout his life defended the right to free speech. In the future they plan to carry out a variety of journalistic activities.

Getting to the mall

Journalists Alley located on the street Vatutina, which you can get to the bus number 11, 12 and 17 that go along the street and stop at Artema street Shevchenko. Perpendicular to the mall journalists on October street located Chestnut Alley.

What is the best accessible to the Alley journalists from: