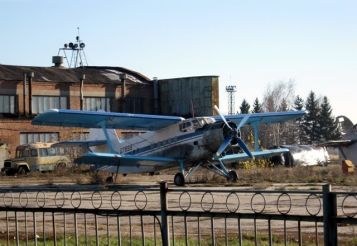 It`s hard not to draw attention to the aircraft cemetery Poltava, leaving from one city to another. Especially attracts old aircraft L-29, standing in front of the checkpoint at the complex. Previously, there was located airbase school training pilots later - Poltava Airport, and now - now rusty and ruined cemetery flight technology.

The history of the cemetery aircraft

Earlier in the territory of the cemetery was formed flight training center named Pokryshkin. Once it was the most powerful school, which trained combat pilots for the three regiments based in Kiev.

Now the former grandeur of this place can only guess. For over ten years, it is empty.

Vyshukalysya aircraft on the ground in three rows. Not far from them housed equipment that was used to deploy the airfield in the field.

Machines like the toy. And planes are incredibly much.

By the same planes visitors are not allowed, even with security. But the fence can look at them.

Cemetery aircraft is on the museum and the strategic long-range aircraft, located outside the city of Poltava. You can get there own transport. Move on to the N12 highway Signal Corps Museum of the Armed Forces, in which several streets turn left onto Liberation and go to the end. Then turn left and move up to fourth road turn right, turn on it and go straight to the intersection. Then you can go to the museum dirt road or travel in the same direction straight asphalt.

What is the best accessible to the Airplane graveyard from: