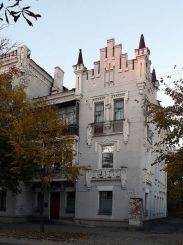 Finance house in Poltava built Pertsovych whose name and structure received. Asymmetric in terms of building a three- and four-part - which is why the creation Pertsovycha considered surprising and unique.

With the status settlement Poltava has long been out and had time to turn into a cozy beautiful city. Increasingly began here getting wealthy people from the capital in search of a relaxing holiday, away from the bustle, yet who do not want to lose touch with civilization. That is why the time became popular apartment houses, which provided the opportunity to rent space, fully furnished apartment.

In 1890, attorney P. Pertsovych built in the center of one of the first profitable buildings. Since then the idea took over many apartment tenants who wanted to get rich on this.

House in terms of asymmetric forms: one part has three floors and the other - a four. A similar idea has caused great interest, because in those days, almost all the houses were built on traditional Poltava symmetrical plan.

The building belongs to the sectional tenement houses with an interior that meets the needs of many tenants. Apartments were divided into household and ceremonial part. Residential and living room had outlets in the internal corridors and rooms in the front of the enfilade had connections. Materials and structures:

In the external design of the building are elements of Gothic style and form. Apartments upper floors have balconies with wrought iron railings. From the court, on the second and third floors, built porches, based on the twisted metal column. From the combination of structural and decorative elements of house building belongs to romantic style early modernism.

Under the existing legend, the unusual architecture built in 1906 attracted the attention of no less interesting resident. Once a rainy autumn night a strange man wrapped from head to foot in a cloak rented apartment on the top floor. From the day he almost never left the room, only occasionally sending a silent servant of orders in the city.

The inhabitants cautiously looked at the mysterious door neighbor. Perhaps because of this fear, or perhaps even on the facts, the city crept all sorts of rumors about a new resident profitable buildings. Some said that the horse next to "lock Richard" bellow furiously, spinning ears and refused to move.

And in the house lodgers there were accidents. Although the true terror in Poltava nahanyaly crows, which for unknown reasons no one loved the roof of the building. It was believed that the blame mysterious stranger, who was called the magician and magician.

The situation did not change until the case where a late autumn evening servant strange inhabitants ran out of the house in search of a doctor. Overcoming fear, some of the staff went to the room of the mysterious stranger and witnessed the horrific scene: a gray-haired man was suffering on the bed in its death throes.

It seemed that death would not take it. The doctor could not help poor thing. Only old maid guess how to solve the situation, she opened the window. In the room immediately burst fresh cold air and horrifying cries of crows. Male sigh of relief and stopped in an unnatural position.

Of course, this is just a legend. However, until today, some noticed that the roof of the house often meets a flock of crows that with loud cries of circling in a giant black funnel.

What is the best accessible to the Profitable House Pertsovicha from: