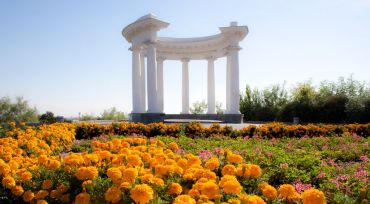 White Rotunda was opened during the celebration of the 200th anniversary of the Battle of Poltava in 1909. It was built on the place where, during the Battle of Poltava Podolsky watchtower and bastion of strength. The fortress had stone walls and was protected only by steep slopes of the hill where it was built, earthworks and a palisade. During the Great Northern War, immediately next to the bastion was watchtower where the soldiers of the garrison and the inhabitants of the fortress repulsed the attacks of the Swedes.

This is a unique monument - eight columns installed in a semicircle at the top supported by delicate wreath that resembles podkovu.Na wreath label - a quote from Natalka Poltavka Kotliarevsky: - "Where the consent of the family, where peace and quiet, Happy there are people, happy side. " Inscription inspired by another name gazebos - "Rotunda friendship of peoples."

The building resembles poltavites that here the day after the Battle of Poltava city artisans met with Peter I. It is no accident and is a form of Pavilions - horseshoe. According to the legend, a local blacksmith in this area expertly shod king's horse, horseshoe lost during the battle of Poltava. It is this legend led to appearance of the building - its horseshoe curved edges of the Assumption Cathedral, located on the columns of the Doric order.

During the German occupation of Poltava in 1941 1943. gazebo was destroyed because its place staged an artillery observation post.

In 1954 it was decided to restore the gazebo in the same place, and to put it into reality helped draft the chief architect of the postwar Poltava LS Vaynhorta. Doric colonnade horseshoe on a stylobate of eight columns penalty height with precision reproduced White gazebo. The new building and got a new name - "Rotunda friendship of peoples" - in celebration of the 300th year anniversary of the reunification of Ukraine with Russia.

In 2008, the City Day, the rotunda was equipped with LED linear lights with alternating 256 thousand colors. In the evening, when activated night light under the rotunda every hour starting light and sound show p'yatnadtsyatyhvylynna. This system was designed in the French city of Lyon.

Today the Rotunda of Peoples Friendship - the perfect place to relax, and the couple have traditionally used it as the photo sessions.

What is the best accessible to the White gazebo from: