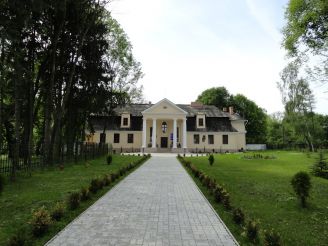 Manor Lipinski remarkable, first of all, that it is the only museum in Ukraine, which is illuminated by the life and public activity of historians and political scientists Vyacheslav Lipinski. In this house, at the time he spent his childhood and youth.

The history of the estate Lipinski

The estate was built in 1871, and around the house there was a magnificent park. Over time, natural phenomena and social changes have imposed their marks and significantly influenced the appearance of the house and the surrounding area. After 11 years after the construction of the manor born here distinguished historian and social activist Vyacheslav Lipinski.

What to see in the estate

For a long time the state was critical of the estate, but the efforts of enthusiasts and sponsors was held thorough restoration. And in 2011 there was the grand opening of the estate within which the exposition dedicated to the life and activity of V. Lipinsky.

Here you can see:

In addition, the recovered fragments of interior office, living room and other rooms.

In addition to the manor Zaturtsah interest is the architectural monument Trinity Catholic Church - the incredible beauty and grandeur of the building, which is well preserved today.

What is the best accessible to the Manor Lipinski from: