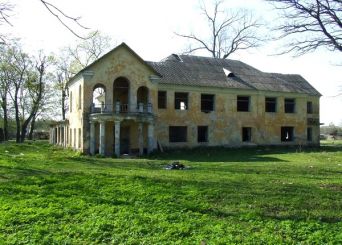 If you drive on the highway Kovel - Lutsk, in the eyes can throw the outlines of a large house and adjacent buildings. This manor Wilga - the front seat of the 18th century in which he lived L. Wilga. In the heyday of the estate is a luxury park at the back which was the main building (manor house itself). Now from the former splendor remained only ruins.

The history of the estate Wilga

According to various historical documents that failed to find a scientist Golob manor was built in 1711 and its owners were different families: Potocki, Podgorodenskie, Ronikery. Change of hosts and socio-political climate has led to the gradual devastation of the estate and its fire.

In its place Chernihiv Governor L. Wilga built a two-storey palace and adjacent buildings, as well as entrance brick gate and park with a pond. Subsequently, the palace also had no luck, and by about 1870 he was in a dilapidated state. The family moved to the wing, to which was attached a concert hall and a greenhouse, but in the late 19th century, the building was dismantled.

On the basis of the destroyed concert hall was built a new house, the area of ​​which increased due to the existing foundation. Today finish building of the tower survived and balcony.

Gates has a hipped roof, plastered with travel arch type, which was then bricked up. Dwells in desolate park was cut of village street.

In Golob has a contemporary manor Wilga - St. Michael`s Church , it is a characteristic of these places architectural monument.

How to get to the manor

Address: town Holoby, Kovel district, Volyn region. Coming from Kovel, you must use the M19 motorway.

What is the best accessible to the Manor Wilga from: