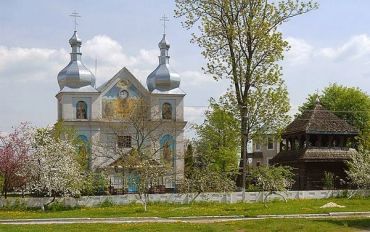 Holoby The settlement, which later became a small town, once subordinated Lutsk castle, which the peasants brought wood and other building materials. During the 18th century the fashion for Baroque captivated Holoby in this style were built almost all the houses, in particular, Wilga Palace, St. Michael`s Church, exit gates and, of course, George Church, built as a Greek Catholic.

History of the St. George`s Church in the village Holoby

In Volyn architecture in most cases reflected the people`s features, which is reflected in the appearance of the St. George church which was already noticeable smooth transition from baroque to classicism, is gaining popularity. Brick temple had two bunk tower facades, dissected blades.

The vaults in the 19th century was replaced by a wooden ceiling and a tiled roof replaced the railroad in 1885. The bell tower, located on the southwest side and built of wood, a bunk, a hipped roof with the gallery arcade; approximate date of construction indicated - the beginning of the 18th century.

In addition to the St. George Church Golob is manor Wilga - the estate of Chernigov magistrates Louis Wilga, or rather what is left of the magnificent palace. Besides the ruins of the manor reminiscent of the entrance gate and the park, cut street. There, in Golob is the church of the Archangel Michael, who is not in the best condition, but has retained its pristine shape.

What is the best accessible to the St. George`s Church from: