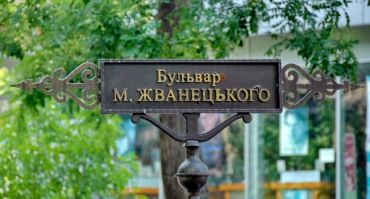 The people there is a perception: to have a great sense of humor, it is imperative to be born from Odessa. That is exactly what happened to the People`s Artist of Ukraine Mikhail Zhvanetsky.

Earlier, before 2009, boulevard called Boulevard Zhvanetskogo Arts, as there is an exhibition hall of the Odessa branch of the Union of Artists. The decision to rename the boulevard was made in honor of the 75th anniversary of the Honorary Citizen of Odessa - satirist M. Zhvanetskogo. Because we all know that he grew up in Odessa and wrote a lot about this wonderful city.

In 2007, at the intersection of streets and avenues of the Transfiguration M. Zhvanetskogo a monument orange. You may think that this is just one of the modern sculptures, which recently decorate the city. In fact, the monument to Odessa Orange has historical significance. More than 200 years ago oranges saved the city, a monument was erected in honor of the City Day celebrations in 2004

Originally the monument was located on another street, near the Archaeological Museum , but after 3 years it moved to the Boulevard of Arts, as UNESCO experts felt that destroys the historical appearance of the monument of Odessa. The people call it "a monument bribes."

Taking a walk along the boulevard, you can see metal plaques with famous sayings Zhvanetskogo. Unfortunately, time and vandals did their job, now these tablets pretty spoiled, although satirical sayings reading is still possible.

Another interesting fact about the boulevard. Literary critics argue that the play Chekhov "The Cherry Orchard" was born here, in connection with what is expected to appear new attractions - the cherry orchard.

During a walk along the boulevard at the guests could get the impression that there is "time stops." Perhaps not coincidentally in this place were once mysterious clock that always show 13 hours and 13 minutes.

On the Promenade, 1 (370 meters) you can visit the Vorontsov Palace . Half a kilometer from the Boulevard, on the street. Havana, 4, is the Historical museum.

What is the best accessible to the Zhvanetskogo Boulevard from: