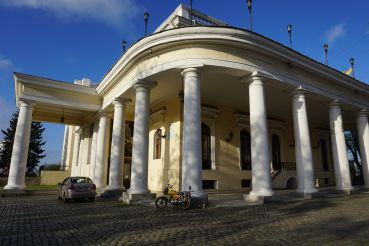 If Odessa - the pearl of the sea, the adornment of the city called the Vorontsov Palace. Its certainly worth a look while walking on Primorsky Boulevard .

The palace complex with a belvedere, stables was the residence of the Governor-General Mikhail Vorontsov 1826. Stayed here the imperial couple.

At the entrance visitors are greeted by a formidable stone lion. The buildings themselves are built in the Empire style and classics by architect F. Boffo. Massive high columns, panels on the facade, patterned frieze - talk about the details of austerity and majesty. However, not all survived from the time of Count Vorontsov.

Double-palace complex suffered damage. During the Crimean War on it scorched the Anglo-French squadron. The Second World War completely destroyed Orlovsky body, the other also suffered. But after both wars the building of the palace complex rises from the ruins and restored. Particular attention should be paid to the character of Odessa - Colonnade of the Vorontsov Palace . Here tourists love to be photographed.

What is the best accessible to the Vorontsov Palace from: