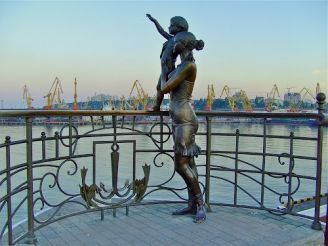 Monument to the sailor`s wife appeared in Odessa City Day 2 September 2002. Interesting composition of a young woman with a small child in the sea berth immediately came to mind all citizens. A complex group of sculptures of bronze represented on the waterfront of Odessa, from the heights of which offers a beautiful view of the incoming and outgoing ships. For a woman with a baby, a special parapet resembling in appearance balcony. Metal forging he made of decorative flowers and simplified emblem of Odessa.

The idea of creating a monument to a sailor`s wife was difficult feasible, since it was necessary to bring in a female figure multiple images. To read it in the sadness of a future separation from her husband, the love of the father of her child and patient waiting by the sea. Gifted sculpture Tokarev these problems were under strength. The heroine, sailor fully corresponds to the image of women. In addition, in Odessa can find dozens of sculptures genius of the author with an unusual story familiar heroes. One such monument Gotsmanov , which can be found in the street near the main Jewish city police control.

What is the best accessible to the Monument wife sailor (Sailor) from: