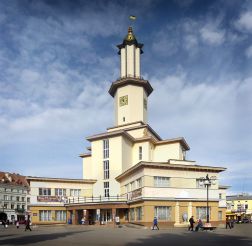 In many cities, one of the main decorations of the town is the Town Hall. As a rule, it is in the heart of the city, in the central square. Perhaps the most unusual town hall boasts Ivano-Frankivsk. She is the only one of its kind, topped by a gilded top. The height of this grandiose construction - 50 meters.

The elegant town hall, which is now a jewel of the city, not once change their appearance. It has more than 400-year history! Originally, it was built in the late 17th century, made of wood. Now it is difficult to believe, but in the old days the town hall was like a circular nine-story tower, made in the style of the Renaissance. It was the abode of the town council, and was used as a fire-tower. Over time, it rebuilt, decorated with four dials. And in the basement housed a prison. During the First World War, the building was used as an observation post.

For the fifth time the town hall was rebuilt in 1935, she settled in shops and restaurants. Today the first floor is a museum. It housed a huge number of exhibits - about 100 thousand! This period furniture, utensils, sculptures, stuffed animals and a lot of interesting things. The new building erected in the style of constructivism. Watch, decorating Now this fashionable building, perform 12 Ukrainian melodies.

To get to Ivano-Frankivsk not be difficult - you can take a train, bus or private car. Town Hall as the main decoration of the city, is one of the oldest squares in the city center. If you arrived in Ivano-Frankivsk by train, then get to the train station to the Market Square can walk in just 15 minutes.

What is the best accessible to the Town Hall from: