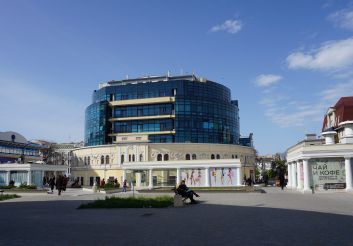 Greek Square is located in the historic center of the city of Odessa. Area frequented by locals and guests of the city.

The emergence of the Greek area

In Odessa, a lot of streets and squares named after different nationalities living here sometime. It - Greek, Hebrew, Italian, Polish and others.

Greek area got its name due to the fact that once, in the days of the Empress Catherine II, the Greeks lived here. At the time, she invited in Russia representatives of different nationalities for the settlement of vacant land. Greek area is located between the street Bunin and no less famous street Deribasovskaya. In gratitude for the significant contribution of the Greeks to the development on the area of Odessa opened the Museum FILIKI ETERIA.

For all the time of existence of the name of the attraction changed only twice: before the establishment of Soviet rule the area was called the same way as now. Later it became known Martynovsky area, and after a while - again Grecheskoy.Na Square is the largest shopping center in Odessa with the beautiful name "Athena".

Attractions of the area

Greek Square is the center of all kinds of events and celebrations. On its territory there are fountains, equipped rest areas, various festivals, exhibitions, concerts and other events. In addition, here it is the only one in the whole of Odessa, the book market and the largest in the city center shopping mall named "Athena". There is also a unique museum housed FILIKI ETERIA that you must visit.

Opposite the Greek area built a modern business center "Kiev", earlier in his place was located a restaurant. And this area is the terminus of many shuttle buses and taxis, so to get here from any part of the city is not a problem. The area is connected and is gradually transformed into the street with the same name - Greek, but it is not far from the Alexander Avenue.

How to get to the Greek Square in Odessa

Greek Square is located in the central part of Odessa. To reach here from the train station is by public transport, bus number 150, 242, 175, 221 and others. If you drive personal vehicles, it is necessary to pass through the streets of Pushkin, cable and Pirogov. The distance from the railway station to the Greek area is about 4 km.

What is the best accessible to the Greek Square from: