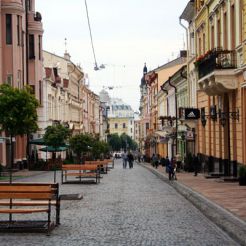 In 1786 was laid the first building on the corner of the main street, this date is considered the beginning of its history. Originally called street Kobylyanska Molodievskoy later - Panská. It is believed that she got this name because of the Austrians, who yearned for his roots and tried on a street in Chernivtsi recreate a piece of their homes. There are also plenty of the most unusual city salons, restaurants, coffee houses, shops, banks and more.

Kobylianska Street in Chernivtsi is famous because of its sweeping bouquets of roses and not allowed visitors in dirty shoes. Every morning janitors washed the pavement and street pavement soap.

What to see on the main street of Chernivtsi

Olga Kobylyanska Street was completely renovated in 2008, the 600th anniversary of the city. Cobbles shifted and sidewalks U Mosta marble tiles on the curb in different languages ​​was displayed name of the town. At home on the main street are the outstanding representatives of the different architectural styles in Europe.

It operates regional museum of the city, which houses the largest collection of Bukovina attractions, including archaeological materials, old print, weapons and many other things. Hall of Organ and Chamber Music, the former Armenian-Catholic church, another creation of architect J. Hlávka. Opposite the church is a unique object Kobylyanska street in Chernivtsi - Ukrainian People`s House, it was opened in 1887. It was in this building himself Ivan Franko read his poems.

Kobylianska Street in Chernivtsi is located in the central part of the city, it goes to the south from the central square. It is pedestrian, so to get here is impossible to transport. The tourists have the opportunity to drive to the area of the Cathedral, with the city`s railway station here goes the trolley number 3, 5, 3A, bus number 17, 10 and others, and then you need to walk.

What is the best accessible to the Kobylyanska Street from: