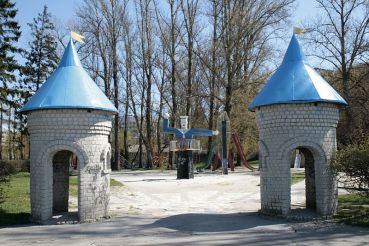 Once upon a time, the city of Ternopil just started its history with the construction of the castle and the creation of an artificial lake. Each era brings its own changes in the city`s history, but in the 20th century two devastating wars changed the very image of Ternopil. The city walls were destroyed, the final chord in this sad story was the disappearance of the symbol of the city - an artificial lake.

When a country recovering from years of war, local influential people and citizens who care about the fate of Ternopil, jointly by the lake resumed around him and broke Park, which was named one of the largest Ukrainian - Shevchenko.

For three years in place of wasteland stretches young Park, whose grand opening was held July 19, 1953.

Since that date, the central park became a favorite spot of locals and tourists.

What to see in the park

In this green corner of the city is its small stavochok that connects channel from Ternopil Pond. Its Reach the water are seen two islands - Love and "The Seagull." You can reach them by bridges. On the island of love stands the gazebo Lovers. Best place for romance not find, agree.

The southern part of the park is called "Pidzamche." Once this place was not too attractive, but over time there planted trees and broke the track, both sides of which are sculptures of local artists.

Another "chip" of the park is lovely cascading fountain. During the day he sparkles in the sun, and in the evening illuminated all the colors of the rainbow.

The variety of flora is also impressive. There are growing near Tui, lime, trees, oaks, and they fit harmoniously into the surrounding landscape.

How to get to the park Shevchenko in Ternopil

The park is located on the shore of the pond Ternopil: Biletska between the streets and the Castle.

What is the best accessible to the Park them. Shevchenko from: