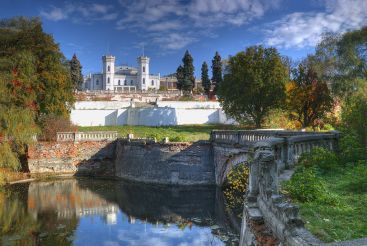 In the southwest of the Kharkiv region near the river is a small settlement Merchyk Sharovka. He is known mainly picturesque sceneries, clean and fresh air and one of the finest ensembles of Ukraine.

Once in the distant 1670s captain Matthew Shary decided to establish a settlement on the banks of the river, and history of the park began. Construction of the garden and the beginning of construction of the palace Olkhovskaya family - the first owners of the estate. When in the late 19th century manor acquired German Count Leopold Koenig began her heyday.

There is a legend that a young nobleman Koenig loved Ukrainian girl. He bought the Manor, to be closer to his lover, and asked for her hand. She agreed and soon became the mistress of the palace of Count. Leopold Koenig played all the whims of his beloved. It was for her sake he changed the look of the estate, that he began to resemble a palace, which was named "White Swan."

Count Boris Jacobi invited architect who designed the central part of the structure. Now here are two towering turrets, giving the building grandeur of the palace. From the main entrance to the garden and pool fountain led a large staircase with three terraces. The central part of the structure presupposes the existence of a large hall for various receptions and celebrations. The eastern side of the architect developed a plan veranda, which was made entirely of glass. Thus, the lock with rich decor, moldings and sculptural elements resembled a striking example of the Renaissance buildings, which are harmoniously intertwined Gothic details. When entering the estate you will see ancient fortress gate with teeth.

"White Swan" effectively stands out from other houses. After the palace was ready, Leopold Koenig ordered that the estate is also built to protect the building with a gabled roof, gardener's house and front gardens, greenhouses and greenhouses, and in the forest - a forester's hut.

When awake Sharovka, walk on the garden and park facilities. This is a work of art. Legend says that soon after the marriage the wife of Count Koenig ill and was diagnosed - tuberculosis. While the disease is heralded the imminent demise. To somehow alleviate the suffering wife, Earl broke park here. Were dug ponds, planted several varieties of pine trees and linden favorite girl. And in fact, these trees look quite unusual. Their branches that spread out to the sides is not as usual, but vertically. There is also a centuries-old giant oaks.

The park is also a "stone of love", whose graph confessed his love for his beloved. They say if you touch him beloved, then happiness will never leave them. If someone else is in search of the second half, the touch of the "stone of love" will accelerate meeting.

Sharovka reach you from Kharkov. With the central market and bus depart buses towards Krasnokutsk. Before pointer "Sharovka" need to get out and go on foot to the castle, which takes about five minutes.

What is the best accessible to the Palace Koenig from: