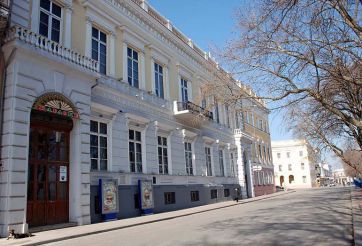 Palace or Palace of seafarers Naryshkin, as it is often called, was built in the early 19th century. Today it is an architectural monument of national importance.

Its creator was the talented architect Franz Boffo, on the initiative of the landowner Shydlovsky. Construction of two-storey house with basement room took several years (1829-1830 years). In the same period the palace becomes the mistress Countess Maria Naryshkin   favorite of Emperor Alexander I.

The main feature of the building was the restrained luxury of the palace of character that goes out of fashion for many centuries. Ageless Beauty Home became legendary. Preserve the unique staircase with mirrored walls two meters. Already in the 1860s, the palace became state property, thus, the interior rooms of the palace changed very slowly. Dozens of marble vases, fireplaces in expensive decoration - all this is gradually being replaced standard trim bureaucratic offices, without losing a wonderful shine and luxury.

In 1924, the building opened Palace sailors who received the honorary title of one of the most important monuments of the city`s historic district.

What is the best accessible to the Odesa Seamen's Palace (Naryshkin Palace) from: