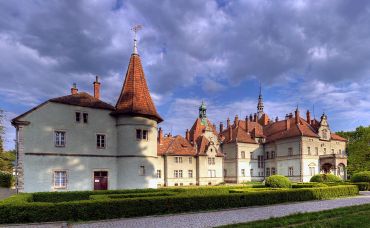 In a small village of the Carpathians is one of the most beautiful buildings - Castle Schonborn. The palace was built in the years 1890-1895 on the initiative of Count Schonborn Buheyma. Originally it housed a wooden summer residence of the famous family, and was later rebuilt by the majestic palace, created in the French Renaissance style.

Windows and doors are decorated with artful stained glass made based on biblical stories. Over the four towers of the palace stood, differing from each other by shape and size. Each tower crowned with a weather vane on which the ball is carved the date of construction of the palace.

The castle surrounded by a magnificent garden, laid out in the middle of the 19th century. The real decoration of the garden is a small lake located among the greenery. Today in the garden you can see the rare varieties of ornamental trees, such as boxwood, Canadian spruce, catalpa, Weymouth pine, Japanese cherry, cherry, pink beech.

At present, the old castle Shenbornov houses one of the buildings of the sanatorium.

What is the best accessible to the Castle Shenbornov from: