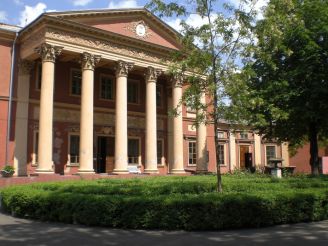 In the spacious mansion of the first half of the 19th century located Odessa Art Museum - OXM briefly. The building was erected in the traditions of Russian classicism. Romantic era also embodied: under the central part of the body there is a man-made grotto with artificial waterfall. From it are underground galleries that have access to a large garden on the seashore. First mansion belonged to the Countess Olga Naryshkina (nee - Pototskaya). Then it was bought by the mayor of Odessa G. Marazli. This philanthropist and gave the building a city under the Museum of Fine Arts. Opened it in 1899. In the museum you can admire paintings by the famous marine painter Ivan Aivazovsky, acquainted with the work of the Wanderers - Savrasova, Levitan, Repin, Shishkin, Kuindji Surikov. Impressed by the great masters of painting brush - Vrubel and Roerich. Fresh breath of our time - in the department of modern art. Hall of decorative art is folk art of Ukraine, embroidery, ceramics, wood carvings, glass. Tuesdays at the museum exit. Branch OXM - Anan`evskij Art Museum .

What is the best accessible to the Odesa Art Museum from: