The Mother of the Fatherland Sculpture-Monument 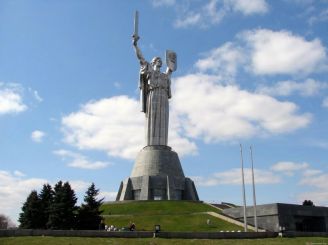 The monument was erected in honor of WWII. It aims to preserve the memory of that terrible time and millions of soldiers, officers and ordinary people who lost their lives in a battle with Nazi troops Kyiv and many other cities and republics of the USSR.

On the banks of the Dnieper battle was played out, which resulted in the fate of the front in 1941. At this time, thousands of soldiers were killed, but it is possible to leave the main forces and align the front. On 13 November 1943, during the ten-offensive of the Red Army liberated Kyiv, initiating displacement of troops from the territory of the USSR.

The history of the monument-sculpture Motherland

One of the largest sculptures in the world - a sculpture-monument "Motherland." It was built with stainless steel plates weighing 25-30 tons to a height of 102 meters. The dimensions of the figures amounted to 62 meters, while the pedestal, which combines building and the Museum of the Great Patriotic War, rising to a height of 40 meters.

Development of the project in 70 of the 20 century began Vuchetych Eugene, erected by sculptor sculpture in Volgograd "Motherland is calling." Collection of statues and the creation of its parts were assigned to the Kyiv plant named after the Paris Commune and ended in 1981. The statue was discovered on May 9 this year the Victory Day LA I. Brezhnev.

Getting to sculpture Motherland

You can get to the monument on the subway, traveling to the station "Arsenal" and "Friendship of Peoples", then approach the eternal flame, then - to the Kiev-Pechersk Lavra and Museum of the Great Patriotic War . The museum exhibits models of equipment of 1941-1945, and released after the war tanks T62 helicopter "Mi-24" and many other exhibits that are worth paying attention to when visiting the museum.

What is the best accessible to the The Mother of the Fatherland Sculpture-Monument from: