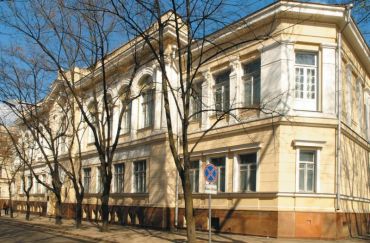 Collection of fine and applied arts Kharkov State Museum is one of the most complete and valuable in Ukraine. Its collections number about 25 thousand copies of drawing, painting, decorative arts and sculpture. The museum hosts special tours, lectures and interactive activities for children.

The history of the Kharkiv Art Museum

The history of the emergence of the museum dates back to 1805, when the University of Kharkov acquired about 2500 graphic works by Western European masters. Another precursor of the museum was founded in 1886 Kharkiv City Museum of Art and Industry. It was one of the first public museums in those times. His work was primarily concerned with the work of Russian and Ukrainian artists.

Over the years the museum has repeatedly changed its name, and its ever-expanding collection. In the 30s of the 20th century it was closed to the public. Reborn from the ashes and ruins of the Great Patriotic War, in 1944 the Kharkov Art Museum begins a new life. From that period to the present day museum is located in a historic building in classic style with Baroque elements, built an outstanding Ukrainian architect Beketov. In the postwar years, the museum activates permament exhibition, scientific, educational and collecting activities.

About the richness and diversity of the Kharkov Art Collection can talk endlessly. Currently, the 25 rooms of the museum are works of Russian and Ukrainian art of pre-revolutionary and Soviet periods of Western art, as well as arts and crafts 16-20 centuries. The exhibition is a work of outstanding Russian artists such as Ivan Aivazovsky, Ivan Shishkin, V. Borovikovsky, DG Levitsky, K. Briullov and many other artists. It was in Kharkov museum exhibits the largest in Ukraine collection of 11 paintings by Ilya Repin. Among them is one of the most famous of his works - "The Cossacks writing a letter to the Sultan." On the composition of art collections of Ukraine Kharkov Art Museum is one of the richest. The collection also includes the collection of works of famous Western artists ages 16-18 and paintings that the museum (then University) received from its graduates. Today, this work is the department of foreign art.

What is the best accessible to the The Kharkiv Art Museum from: