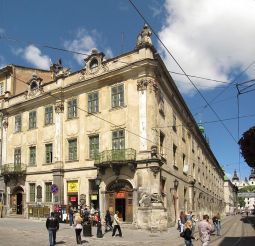 In the centre of the historic city of L’viv on Rynok Square, in the house numbered 10, Lubomirski Palace is located. Three facades of the buildings face to Rynok Square, Rus’ka Street and Fedorova Street. In 1760, Prince Stanislaw Lubomirski bought a kam’ianytsia from Prince John Sapiha and a few more other buildings in the Gothic style, and then combined them into one building, which now bears his name - Lubomirski Palace. In 1763 under the project of an architect Jan de Witte a fundamental restructuring was carried out. Many famous architects and sculptors worked on the construction. The palace is designed in the Rococo style, its facade is divided by pilasters and cornices, and windows are remarkable for its embossed decorations. Attic is decorated by dormer windows, cartouches and a figure of an eagle. You can also see elements of military paraphernalia.

The Palace is also called Eagle House. In the late 18th century there was a residence of an Austrian governor of Galicia. In the late 19th – early 20th centuries, a variety of cultural and educational institutions, visited by many eminent people of Ukrainian culture, were located in this building. Gothic masonry and basements, where cellars used to be, were built in the 17th century, as the cartouche of 1695 on carved stone portal, facing to Fedorova Street, shows.

Today the Museum of Ethnography and Crafts is located in the palace, where rare artefacts, that reflect decorative arts of Europe 16th - early 20th centuries, are presented. You will see unique collections of furniture, porcelain and earthenware. And on the second floor you will have an opportunity to get to know Ukrainian art of 18th - 19th centuries. You will be also impressed with its interior, especially beautiful fireplaces, projected by Sebastian Fesinger.

What is the best accessible to the Lubomirski Palace from: