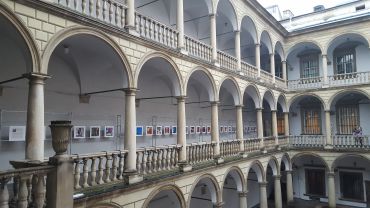 In the centre of the historic city of L’viv on Rynok Square in the house numbered 6 Korniakt Palace can be noted by you. In Ukrainian this building of stone and brick is called kam’ianytsia, which was built by following the “rule of three windows”, which occurred on Rynok Square. Each kam’ianytsia couldn’t have more than three windows on the facade. It gave the right of equal opportunities, because the windows of the first floor could be used for trading, workshop, or advertising.This kam’ianytsia belonged to the richest merchant in the history of the city, Constantine Korniakt, who was given the noble title for services to the Polish king and permitted to build a palace with six windows. Italian architects Petro Barbon and Pavlo Rymlianyn engineered this kam’ianytsia. In the mid 17th century the palace became the property of the Polish King Jan III Sobieski, and now it is the History Museum.

The palace was visited by many eminent people. The Eternal Peace Treaty of 1686 between Russia and Poland was signed here. By origin Korniakt was Greek and he controlled trade of wine throughout the Black Sea. A spruce twig hung at the entrance to the palace, meaning wine was sold at this place. In the basement there was a tavern, and only wealthy people of L’viv could get there. Today anyone can visit it. The palace is famous thanks to its royal halls, designed in the Renaissance style, as well as to the Gothic hall, an attraction of society Gothic C15th.

Italian Courtyard, located in the courtyard of the palace and surrounded by an open three-storey arcade, is a place that simply shouldn’t be missed by you. It is built like courtyards of Rome and Florence. In summer you can visit a cafe there and enjoy memorable concerts, festivals, classical and jazz music. You might feel yourself as a citizen of a small Italian town with Ukrainian charm. You can also visit interesting exhibitions and various art events that are held there.

What is the best accessible to the Korniakt Palace from: