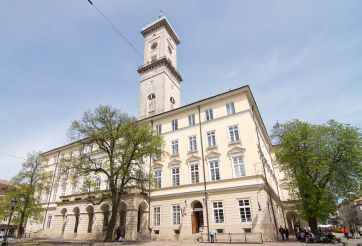 Rynok Square is a part of L’viv Historic Centre, which is in a UNESCO World Heritage List. Its main attraction and the central building of the square is the City Hall.

In 1356, L’viv received the Magdeburg Law and the city searched for a place, where local government authorities could be located. Thus the first wooden City Hall (in Ukrainian Ratusha) was built. This word came from German "Rathaus", which means “council house”. Unfortunately, the first City Hall burned down in 1381, later it was restored, and in the early 17th century a tower was added to the City Hall. In the archives of L’viv you can find an interesting document, dated July 14, 1826, which deals with that the City Hall was in a condition fit for use. On signature of this document the building collapsed, killing eight people. In 1835 a new City Hall was built in the style of Viennese Classicism. That Ratusha has been preserved quite well till the present day. Only the dome, which was destroyed during the uprising of 1848, was replaced with a balcony overlooking the picturesque view of ancient L’viv. At the tower you might notice a blue and yellow waving flag, which for the first time was hoisted in 1919.

There is an interesting legend about the City Hall. Many years ago there was a court in its rooms. It happened so that an innocent was sentenced to death and after that a ghost of coffin appeared in the halls of Ratusha. Then, it was decided to write on the judgment book: "Remember the coffin". Much time passed since then ... today the L’viv City Council is situated in the City Hall. Anyone can come there and climb the tower. You will need to overcome about 400 steps to reach the viewing platform. Also you will be able to see the clock mechanism, which has been working since 1852. People say if you climb the platform and make a wish at the time the clock strikes, your wish will come true!

What is the best accessible to the The L'viv City Hall from: