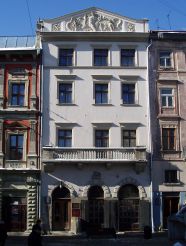 Massarovskaya Kamenica - a building that best reflects the character of the city. Built in the 16th century, Kamenica witnessed many historical upheavals. Its walls gave shelter to Lviv adviser to Gordon. And in a turbulent 18th century reliably protected from prying ears secret negotiations of Peter I and the Polish nobility.

All of these events occurred in Massarovskoy Kamenica not accidental. This building has always been fanned by an inexplicable mystery that lives in it since its construction.
Venetian Antonio Massari, received the house as a dowry, tried to keep the interior and at the same time to give the structure of Italian charm. As a result, Kamenica in the 16th century became one of the most beautiful and fit for living facilities in the city. The memory of this store remnants of medieval decor and heating systems, which are still visible today.
The final transformation of the house Massari occurred in the early 20th century. In 1920 he appeared on the steps of a winged lion - symbol of Venice, and the building has grown to 4 floors.
Today Massarovskaya Kamenica belongs Lviv Historical Museum , it holds one of the mystical city objects - vane predictor.
Is Massarovskaya Kamenica at Market Square, 24, next to the Kamenica Bielski and Geppnerovskoy Kamenica .

What is the best accessible to the Massari House from: