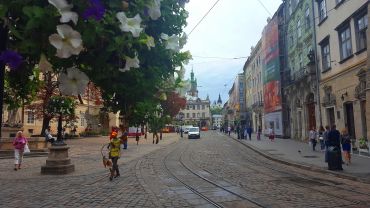 For over five centuries, travellers, connoisseurs of beauty, merchants and tourists from around the world come to L’viv. Every its corner is incredibly beautiful and has its own unique charm, generally creating an unsurpassed model of historical European city. Rynok Square represents its centre.

Rynok Square is one of the most elegant and architecturally perfect places in L’viv. The history of the square is quite interesting. Daniel I of Galicia, known in Ukraine as Danylo Halyts’kyi, the King of Galicia, founded L’viv in the 13th century, but in 1349 the city was conquered by the Polish Kingdom. On behalf of Kazimir III the Great, German colonists began building the city for an example of a medieval European city with a market square in the centre. Its name is associated with the principle of construction and comes from the German word «der Ring», which means "ring, a closed space." Over time the name was transformed in "Rynok". Later, Austrian and Italian architects perfected the beauty of the square with their masterpieces.

The square is architecturally decorated with 44 houses located on the area of measurements of 142 by 129 meters with the city hall in the centre, performed mostly in Renaissance style. Also you can recognize some elements of Gothic architecture, which survived after the largest fire in the history of the city in 1527. New L’viv, including its main square, was quite different, rebuilt in the Renaissance style. After that disaster new buildings were built of stone and brick, being much stronger – they were called “kam’ianytsia”. The facade length of one kam’ianytsia didn’t exceed 9 meters. This is because at that time everybody had to fallow the “rule of three windows”, which occurred on Rynok Square. Each kam’ianytsia couldn’t have more than three windows on the facade. It gave the right of equal opportunities, because the windows of the first floor were used for trading, workshop, or advertising. Thus, kam’ianytsias were built tightly to each other and were elongated inwards. It wasn’t cheap to build a house on Rynok Square – only rich merchants and wealthy aristocracy could afford it. Also, there were restrictions on the number of floors. Only nobles and higher clergy were allowed to build over three floors, or more than three windows on the façade, great examples are Korniakt Palace or Palazzo Bandinelli. Only in the 18th century this rule was abolished, so presently you can notice added storeys on the houses or expanded facades.

Draw your attention to the facades of the buildings. You can easily notice that the distance between the windows varies. Two windows seemed detached – those are chambers, and a small side room, known as vankyr, is located next to them. This is how the famous Black House was engineered. Such planning was typical of the Renaissance. Several centuries ago, there was no numbering, and each kam’ianytsia was named according its typical external signs of decoration or after the name of the owner. Now houses are numbered, but they still bear their historical names, among them – Lubomyrski Palace, Scholz-Wolf House, Heppner House and others. Each building on Rynok Square has many interesting legends, and, no doubt, is worth your attention. The most interesting and most valuable of them are on the east side of the square.

Architects and artists have tried to make each kam’ianytsia unique and special, using the latest technologies of those times, decorating and adorning interior and exterior. In the Middle Ages, every house was in colour, representing well famous “L’viv polychrome”, but because of the proliferation of cement companies, in the 19th century, under Austrian rule, all houses were painted in gray. Only 30 years ago kam’ianytsias were coloured as they were many years ago.

Rynok Square with its originality, elegance and perfection will impress you! It is also decorated with four fountains with statues of Greek gods, symmetrically located around the City Hall. Walk on the square inspires! Ancient paving, architectural mosaics of kam’ianytsias and majestic City Hall create a charming atmosphere of the Middle Ages.

What is the best accessible to the Rynok Square from: