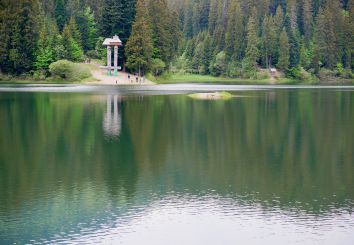 On the top of Ozyrna, in National Nature Synevir Park you will see the “sea eye” of the Carpathian Mountains – Synevir Lake, which is considered to be a gem of the Carpathians; it appeared in result of a strong displacement approximately 10 thousand years ago. The area of pure and transparent source water makes up about 5 hectares, and the depth sometimes reaches 22 meters. However, old inhabitants say, no one has succeeded in sounding the real depth yet.

A great number of legends and histories are round the lake. One of them should be told to explain the name of Synevir “See Eye”. Once upon a time the mountains were the lands of a count, who had a beautiful daughter, Syn’. She took the name due to her blue eyes, to be compared with the sky. Once, gathering flowers on the mountain slopes, she saw Vyr, a herdsman who played the pipe; that was the way young people fell in love. Having found out of daughter’s love, her father ordered to kill Vyr. The dependents of the count threw a huge stone onto the boy. Syn’ deplored her beloved for a long time and as a result a blue lake, the one as her eyes, formed. In the middle of the lake one can see the top of that stone. And nowadays this small island is in the middle of blue waters.

Local masters have created wooden sculptures Syn’ and Vyr and located them near Synevir. Thus, people try to amplify expressive beauty of the Carpathian Mountains and the blue lake surrounded by long-lived beeches and firs. The nature of this land admired with its firs, beeches, pines, exotic plants, mushrooms, dewberries, bilberries, raspberries and many other endowments. Quite often you might notice specially built hovels, where you can drink spring water. In forests and valleys you may find deer, bears, roes, wild boars, wolves, badgers, foxes, lynxes, eagle-owls, hares, storks and the others.

If you go to the lake in the middle of August, you will have a possibility to visit the folk music festival “Tubas invite you to Synevir”, a place to arrange music performances, exhibitions of national decorative-applicative art and culinary contests. You will remember a holiday at Synevir Lake for a long time! You will never forget tasty mushroom pottage (yushka), home-made smoked foods, hominy with residues, grilled trout, (besides, the lake is rich in fish, however you are forbade to catch it), banush, brynza and other delicacies, which you can sample in kolyba – a small Hutsul restaurant, while enjoying picturesque nature of Synevir.

What is the best accessible to the Synevyr Lake from: