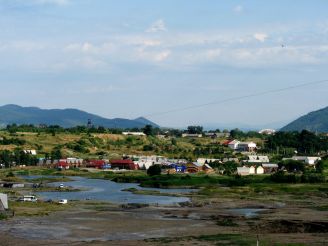 In the picturesque Carpathian Mountains on the border between Ukraine and Romania, there is a small village Solotvino. Here is the natural and man-made miracle at the same time - Solotvinskie lake. Most of these reservoirs - very salty, which allows them to swim in, even those who can not swim. On the medical and health properties, they compete with the Dead Sea in Israel. There are also lakes with fresh water and iodized. The origin of these unique bodies of water are required to salt production: as a result of human activity and the ground sank filled with water. Biggest of Solotvyno Lakes - Kunigunda. Legend has it that its name it must wife of the Russian prince Jaropolk, a German princess. This lake was formed after the failure of the explosion at the salt mine in 1902. Wanted to punish the guilty, but then realized that the salt lakes - the perfect place for treatment and rehabilitation. Kunigunda Lake is also known for its healing mud. Solotvinskie go on the lake, tourists - to treat arthritis, asthma, allergies and just swim. The village itself is surrounded by forest, it is mixed with the smell of salt air, allowing you to breathe really deeply. In Solotvino is Ukrainian Allergic Hospital, which also treat diseases of the musculoskeletal system. It is located in the salt array in a cave at a depth of 300 meters. Clean air, which contains 5-7 times less microorganisms than in the operating room, cures respiratory tract. Get to Solotvino comfortably from Lviv and Mukachevo .

What is the best accessible to the Solotvyno Lakes from: